Since 1990, the number of agricultural jobs in Oklahoma has declined by 77%, according to figures from the U.S. Census. This period of employment decline in the farming and ranching industry—once a pillar of the state’s job market—coincides with the expansion of corporate-industrial farming, beginning with the introduction of corporate agriculture in 1969, and accelerating with the arrival of concentrated swine and poultry operations in 1991.

Oklahoma is currently engaged in a serious debate about agriculture, as voters consider State Question 777, known as Right to Farm or Right to Harm. Kirkpatrick Foundation is conducting analysis and education in a number of areas related to SQ777, including rural economies, environmental conservation, legal and constitutional analysis, foreign ownership and investment, and animal welfare.

“We believe the passage of State Question 777 would not improve job growth in the agricultural sector, and could even cause more decline, on par with the arrival of factory hog and chicken farming in the 1990s,” says Louisa McCune, the foundation’s executive director. “The facts are clear: When corporate-industrial agriculture does well, jobs go away.”

The effect is not limited to Oklahoma. The U.S. Bureau of Labor Statistics has predicted the agriculture sector will lead the nation’s industries in job loss through 2020, due mainly to advances in technology and the globalization of the food supply.

Historically, Mr. Jones says the steepest drop in Oklahoma agricultural jobs occurred between 1990 and 2000, when the number of hired farm workers fell 72%, from 49,681 to 13,721. The trend continued through 2014, the most recent year for which census data is currently available, and a year when the number of Oklahoma agricultural jobs totaled 11,560.

“The decline in agricultural jobs between 1990 and 2014 is the steepest drop in farm and ranch work in Oklahoma history,” says Jones. 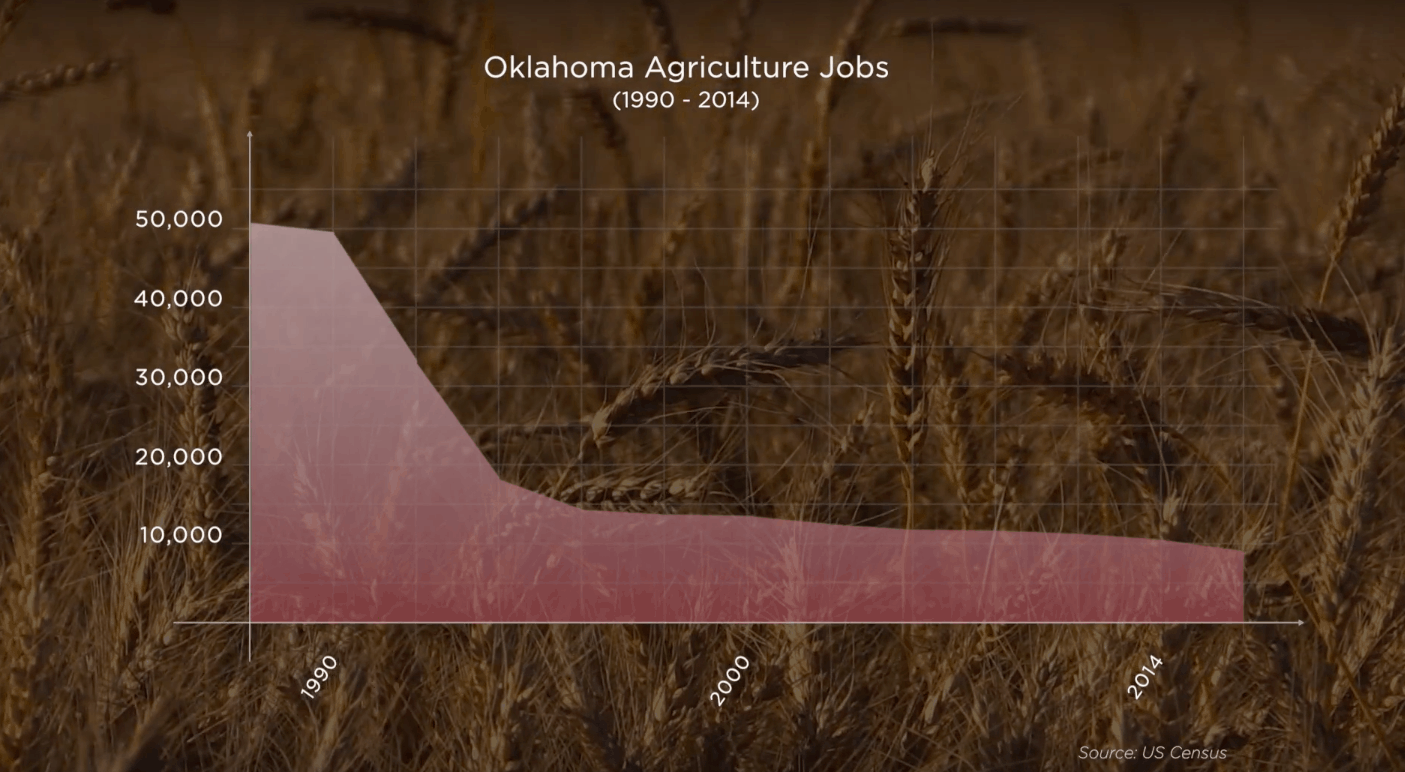 “This means Oklahoma lost a greater percentage of agricultural jobs in the last twenty-five years, since the arrival of industrial livestock production, than the state lost in subsistence agriculture during the Dust Bowl,” he says.

This period of declining jobs coincides with the introduction and expansion of corporate farming in Oklahoma. From 1907 to 1969, there was consensus in state government that the Oklahoma constitution prohibited corporations from operating in the agricultural trade.

“In 1969, the state Supreme Court decided LeForce v. Bullard, holding that the Constitution did not, in fact, prohibit corporations from engaging in the farm and ranch business,” says Jones. “That decision appears to have had a direct influence on the number of agricultural jobs.”

The decline accelerated rapidly between 1990 and 2000, coinciding with the expansion of concentrated animal feeding operations in the state, following amendments to the state’s corporate farming code in 1991 that allowed large-scale industrial swine and poultry production to do business in Oklahoma.

The downward trend continued through the first fifteen years of this century. In 2005, Oklahoma had slightly under 14,000 agricultural jobs statewide; by 2014, the state had 11,560.

State Question 777, a proposed constitutional amendment, says in part, “The Legislature shall pass no law which abridges the right of citizens and lawful residents of Oklahoma to employ agricultural technology and livestock production and ranching practices without a compelling state interest.”

In effect, the amendment would render any future legal measure (municipal, county, or state) restricting agriculture subject to a lawsuit challenging its constitutionality, creating both a chilling effect that could discourage future laws affecting farming and ranching, as well as costly litigation should a suit be filed. Courts would be required to apply the toughest test in judicial review to determine whether challenged measures would survive, placing the ultimate decision outside democratically elected bodies and in the hands of the judiciary.