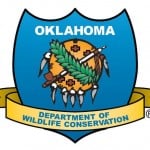 June 10, 2014 – The Oklahoma Department of Wildlife Conservation and the U.S. Fish and Wildlife Service (FWS) have announced an agreement to extend and expand the Landowner Incentive Program (LIP) Federal Grant for at-risk species in Oklahoma, a development that promises to enhance current efforts to conserve the Lesser Prairie-chicken.

The grant’s scope has been expanded to allow the Wildlife Department to focus remaining LIP funds and resources on helping Oklahoma landowners who are enrolled in the Lesser Prairie-chicken Candidate Conservation Agreement with Assurances (CCAA). Also, the Service has agreed to extend the LIP grant until June 30, 2015.

“Facilitating the expansion of the scope of this grant enables ODWC to focus additional resources on private landowners enrolled in the Oklahoma CCAA to further critical conservation and restoration efforts to benefit the Lesser Prairie-chicken,” said Dr. Benjamin Tuggle, FWS Regional Director for the Southwest Region. 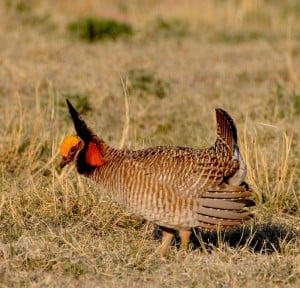 “The U.S. Fish and Wildlife Service should be commended for approving our request to extend our Landowner Incentive Program Grant and expand the scope to include the Lesser Prairie-chicken. This additional time and funding for Oklahoma’s Landowner Incentive Program will go a long way toward the Wildlife Department’s management efforts to conserve the Lesser Prairie-chicken,” Hatcher said.

On April 10, 2014, the FWS issued its final rule listing the Lesser Prairie-chicken as a threatened species under the Endangered Species Act.

Oklahoma’s LIP grant was originally approved in 2004. It enabled the Wildlife Department to work with private landowners to conserve and restore areas of short-grass and mixed-grass prairie habitat. Through the program, landowners could receive payments when they voluntarily accepted incentives to conserve short- and mixed-grass prairie habitats and species of concern.

With this recent amendment, the Wildlife Department will begin a targeted effort to assist private landowners already enrolled in the Lesser Prairie-chicken CCAA to monitor grazing use of native range pastureland. This effort requires construction and placement of 64-square-foot grazing exclosures to be used in monitoring grazing and habitat conditions. The exclosures and monitoring allow landowners to adjust grazing pressure as needed to retain adequate Lesser Prairie-chicken nesting habitat.

“The Service remains committed to working with private landowners, the states, industry and others to conserve the chicken and its habitat while ensuring on-the-ground activities are able to continue on this working landscape,” says Tuggle

Landowners who enrolled acres in Oklahoma’s CCAA can seek technical and financial assistance through the LIP. The CCAA covers activities intended to conserve, restore and enhance habitat for the Lesser Prairie-chicken within the bird’s natural range. Almost 400,000 acres are enrolled under the CCAA in Beaver, Beckham, Cimarron, Dewey, Ellis, Harper, Major, Roger Mills, Texas, Woods and Woodward counties.

Oklahoma landowners with a CCAA who would like more information on this amendment may call habitat coordinator Alva Gregory at (580) 334-4459.