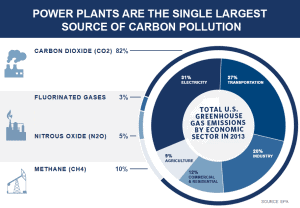 By 2030, the plan will cut carbon pollution from the power sector by nearly a third and additional reductions will come from pollutants that can create dangerous soot and smog, translating to significant health benefits for the American people. By 2030, emissions of sulfur dioxide from power plants will be 90 percent lower and emissions of nitrogen oxides will be 72 percent lower, compared to 2005 levels.

“These flexible, achievable, science-based rules represent real progress for protecting wildlife and America’s outdoor heritage from the worst impacts of climate change,” said Collin O’Mara, president and chief executive officer of the National Wildlife Federation.” Hunters, anglers and outdoor enthusiasts experience firsthand how climate impacts are threatening wildlife from coast to coast—from fueling warming trout and salmon runs to toxic algae in Lake Erie and Florida; from record droughts in Texas and California and wildfires destroying forest habitat across the west; and from extreme storms along the East Coast to accelerating erosion in the Gulf. Conserving wildlife, protecting our clean air and water, and safeguarding our communities all require that we reduce carbon pollution.”

The final rule establishes guidelines for states to follow in developing and implementing their plans, including requirements that vulnerable communities have a seat at the table with other stakeholders. EPA is proposing a model rule states can adopt, as well as a federal plan that the EPA will put in place if a state fails to submit an adequate plan. Both the proposed model rule and federal plan focus on emissions trading mechanisms to make sure utilities have broad flexibility to reach their carbon pollution reduction goals. EPA also finalized standards to limit carbon pollution from new, modified and reconstructed power plants.

In April, Governor Mary Fallin issued an executive order pledging not to comply with the new rules. Following the release of the final rule, she said the plan “represents one of the most expansive and expensive regulatory burdens ever imposed on U.S. families and businesses.”

Oklahoma Attorney General Scott Pruitt has previously challenged the EPA over the proposed rule with two lawsuits claiming the rule in unconstitutional. Both legal challenges were both dismissed, but are currently being appealed now that the rule is final. Pruitt and Fallin have pledged to continue to fight against the regulations of the Clean Power Plan.