Whooping cranes, the tallest and one of the rarest birds in North America, will soon be migrating through Oklahoma to their South Texas wintering grounds, says the Oklahoma Department of Wildlife Conservation. 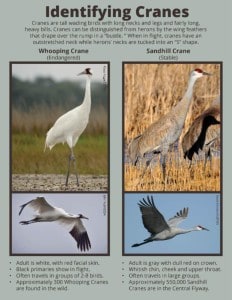 To better understand the migration paths and habitat of this endangered bird, the Oklahoma Department of Wildlife Conservation works with other member agencies of the Central Flyway Council to track the birds as they pass through the United States.

“We expect to see the first cranes enter the state in late October, and migration often lasts through mid-November,” said Mark Howery, wildlife diversity biologist for the Wildlife Department.

Should you see a whooping crane, please take note of the number of birds, the date, time, location and habitat in the area. Sightings can be reported online at wildlifedepartment.com, or report forms can be emailed to mark.howery@odwc.ok.gov. As whooping cranes typically spend only a few days at a stopover site and biologists hope to confirm sightings, reports are encouraged as soon as possible.

“Whooping cranes are white overall, with a red forehead and cheek. In flight, black wing tips can be seen. The birds stand nearly 5 feet tall and have a wingspan of over 7 feet,” Howery said.

Similar birds include the sandhill crane and American white pelican.

The Journey
The 2,500 mile route from the whooping crane’s breeding grounds at Wood Buffalo National Park in Alberta to their coastal wintering area at Aransas National Wildlife Refuge in Texas takes approximately 50 days to complete. When the birds reach Oklahoma, their fall migration is nearly 75 percent finished. Along their journey, these uncommon birds must make several stops to rest and refuel. 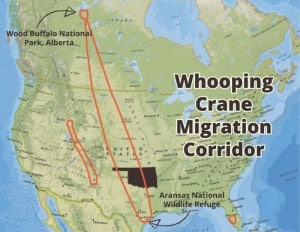 “Oklahoma hosts one of the most frequently used fall whooping crane stopover sites at Salt Plains National Wildlife Refuge,” said Wade Harrell, whooping crane recovery coordinator for the U.S. Fish and Wildlife Service. “Having high quality habitat to stop and rest along this migration is critical to maintaining and growing the whooping crane population,” Harrell said.

Whooping cranes are naturally rare but were once more widespread than today’s population. In the 1800s more than 10,000 whooping cranes were thought to occupy the central portion of North America. By 1941, the population had plummeted to 16 individuals. With wetland habitat improvement and wildlife conservation laws, the population has steadily increased 4 percent each year. Earlier this spring, the U.S. FWS reported 310 birds. The Canadian Wildlife Service documented 66 nests this summer, from which 23 chicks were successfully fledged.

For more information about whooping cranes in Oklahoma, contact Howery at (405) 990-7259 or Matt Fullerton, endangered species biologist for the Wildlife Department at (580) 571-5820.