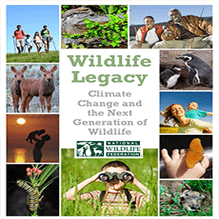 May 12, 2014 – According to a new National Wildlife Federation report, future generations of America’s wildlife and our outdoor heritage are already being hurt by climate change, with urgent action needed at all levels to avoid catastrophic changes. Released in the wake of the National Climate Assessment showing climate change is already impacting America, Wildlife Legacy: Climate Change and the Next Generation of Wildlife shares 15 examples of climate change harming young wildlife, from moose calves to tiger cubs.

“Climate change is making it harder and harder for many animals to raise their young and keep them well fed and healthy, making parenting increasingly stressful for America’s wildlife,” said Felice Stadler, senior director for climate and energy at the National Wildlife Federation and herself a mother of two young children. “That threatens not only future generations of wildlife, but the outdoor heritage that our parents and grandparents worked so hard to build, protect and pass on to us.”

The report details how the young of many treasured species are at risk because of a changing climate, a situation that will worsen if the nation does not curb carbon pollution:

“As this week’s release of the National Climate Assessment documented, climate change is here and it’s already playing havoc with our communities and wildlife habitat,” said Stadler. “What we need is the political leadership to take an all-of-the-above approach to cutting carbon pollution and to make climate-smart investments in protecting our natural resources. We can’t leave this problem for our children and grandchildren to fix – they’ll judge us based on what we do now.”