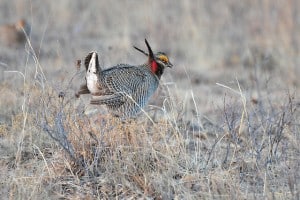 The listing of the Lesser Prairie-Chicken as a “threatened” species by the U.S. Fish and Wildlife Service will go into effect May 12. Because the listing is one step below “endangered” under the Endangered Species Act, many Oklahoma landowners are questioning how this will affect their daily operations.

In a recent interview with StateImpact Oklahoma, Oklahoma Department of Wildlife official Allan Janus says thanks to the unique five-state collaboration between Oklahoma, Colorado, Kansas, New Mexico and Texas to implement proactive conservation practices for the bird, the new federal listing will have little effect on Oklahoma landowners currently participating in that plan. Along with the listing, the U.S. Fish and Wildlife Service issued a special rule that landowners and developers who are participating in the range-wide conservation plan will not be subject to further regulation.

But Oklahoma Attorney General Scott Pruitt and the Oklahoma-based trade group Domestic Energy Producers Alliance, have filed a lawsuit against the federal agency claiming it violated the Endangered Species Act by agreeing to a settlement over a lawsuit from an environmental interest group that led to a consent decree requiring the agency to determine the listing status of the lesser prairie chicken by March 31.

In a recent story, StateImpact Oklahoma traveled to northwestern Oklahoma to get a closer look at this bird that is causing quite the controversy. Read the complete story here.