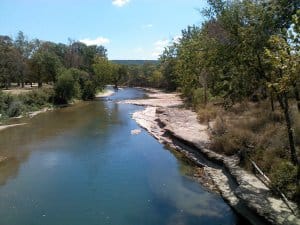 Nov. 26, 2014 – Earlier this month, an interim legislative study committee heard the reasons for protecting Oklahoma Scenic Rivers, why the Oklahoma Scenic Rivers Commission (OSRC) is needed and why both are valuable to Oklahoma.  In a time of agency budget restraints and concern about the future of Oklahoma’s streams, lakes and parks, presenters at the hearing expressed hope that lawmakers and the Governor will hear the message and will adequately fund the state’s natural resources.

Among those testifying at the hearing were Oklahoma State University professors Dr. Tracy Boyer and Dr. Lowell Caneday who described the non-consumptive value of water and scenic rivers.  Recreation is one of those values.

“Oklahoma is on the low end of the scale as far as providing recreational opportunities,” Dr. Caneday said.  “We need these public places for people to enjoy and for the quality of life of our citizens.”

He said studies show that recreation has an annual economic impact of $78-million in the Arkansas River corridor which includes the Illinois River.  More and more out of state visitors depend on Oklahoma’s recreational assets studies show.

“Oklahoma is not growing as fast as Texas and Arkansas and these people are coming to Oklahoma to enjoy our rivers.  Clean water is an attraction and there are no such waters in northeast Texas.”

“Our rivers are essential to the future health of our citizens,” he said.

OSU’s Dr. Tracy Boyer told the committee that water has a high value that is demonstrated by a willingness by people to pay for recreation.

“The value of streams and the value of nature are priceless,” Dr. Boyer said.  “It’s unfortunate there no longer is a user fee which is a way for users to pay for their impact on the resource and for the cost of services necessary to accommodate them…to have some skin in the game,” she said.

Formerly, Oklahoma collected a $1 per person user fee for Illinois River visitors but the fee was dropped at the urging of some river outfitters who were required to collect the fee and remit it to the OSRC to help pay for litter cleanup and law enforcement.

William Andrews, chief of the United States Geological Survey in Oklahoma, told the committee that there has been an improvement in scenic rivers water quality but he cautioned that pollutants including phosphorus are still high.

“Phosphorus is still higher than the point-037 mg/L standard (for scenic rivers),” Andrews said.  “There has been terrific progress made over the past ten-years but we are still not where we want to be.”

Robert Kellogg of Edmond, Okla. testified about his experience working with the Oklahoma Scenic Rivers Commission.  Kellogg, an attorney and former Oklahoma water quality regulator with the Department of Environmental Quality, called the commission “the most efficient environmental organization in the state of Oklahoma.”

“In my 35 years experience, I look at this organization (OSRC) and I wonder how this tiny body stuck over in Tahlequah could do so much,” Kellogg said.

Citing the decades of controversy between Arkansas and Oklahoma over protection of the Illinois River, Kellogg praised the OSRC as an important liaison between states and Oklahoma state agencies.

“In my perspective, the OSRC has kept the peace and has accommodated the floating public.”

Siloam Springs, Arkansas City Manager David Cameron told the Senators that Ed Fite and the OSRC were vital resources for his city during construction of his city’s new sewer treatment plant.

“Ed Fite helped broker an agreement with Oklahoma on what the (pollutant) limits are.  The result was a $25 million plant as opposed to a $5 million plant,” Cameron said.  Speaking about the northwest Arkansas as a whole, Cameron praised the OSRC’s cooperation.

“The investment you have made (in the OSRC) has resulted in $300 million in infrastructure improvement s since 1999,” he said.

OSRC Capt. Bill James, a former Oklahoma Highway Patrolman, told the committee that it’s very difficult to control fights on the Illinois River with the reduced number of law officers he has.

“We must get back to having two full-time rangers in addition our part-time officers,” James said.

In addition to funds for officers, Capt. James cited the need for equipment to replace “hand-me-down” vehicles from other agencies, body armor, Tasers and body cameras to protect officers making arrests and conducting investigations.  “Several years ago we had funds from a $1 user fee.  Having that fee again would be helpful,” he said.

Quizzed about recent calls for a ban on alcohol on the Illinois River, Capt. James said he was not comfortable with the idea.

“Instead of a ban, perhaps we should consider a limiting the amount of beer to one six-pack per adult.  Right now, they’re bringing 30-packs of beer.”

James got a laugh when he told of the increasing number of fights on the river.  There are many fights James said including big one involving college fraternity members swinging canoe paddles.  James said the opponents turned out to be members of a collegiate wrestling team who “cleaned the clocks” of the fraternity fighters.

In response to questions from the committee, OSRC Administrator Fite said the $1 user fee was abolished by the legislature in 2008 at the request of some of the largest river outfitters in exchange for increasing  the commercial use permits from $5 to $35 each.  He urged lawmakers to allow the OSRC to set fees for outfitters.

“Previously we issued 3,900 commercial floatation permits.  The latest issue was 3100 permits and revenue is down.   Rafts now outnumber canoes.  Now there are about 2,000 rafts on the river with four people each and the biggest outfitters are saving money and the smaller ones are paying more,” Fite said.

“It’s time to make a decision on what we will do with the management of our natural resources,” Fite said.