Where have all the monarch butterflies gone?

The Conservation Coalition of Oklahoma works with national organizations like the National Wildlife Federation to create programs to find solutions to the staggering monarch population in Oklahoma – and around the country. Most recently, we’ve worked with the Oklahoma Department of Transportation and neighboring states to create a Monarch Waystation.

The following article appeared in Cowboys & Indians magazine detailing the staggering numbers of monarch butterflies in the United States and how organizations like the National Wildlife Federation are working to make a change:

The good news about the precipitous decline in the population of everyone’s favorite migrating butterflies? It’s not too late to reverse it. 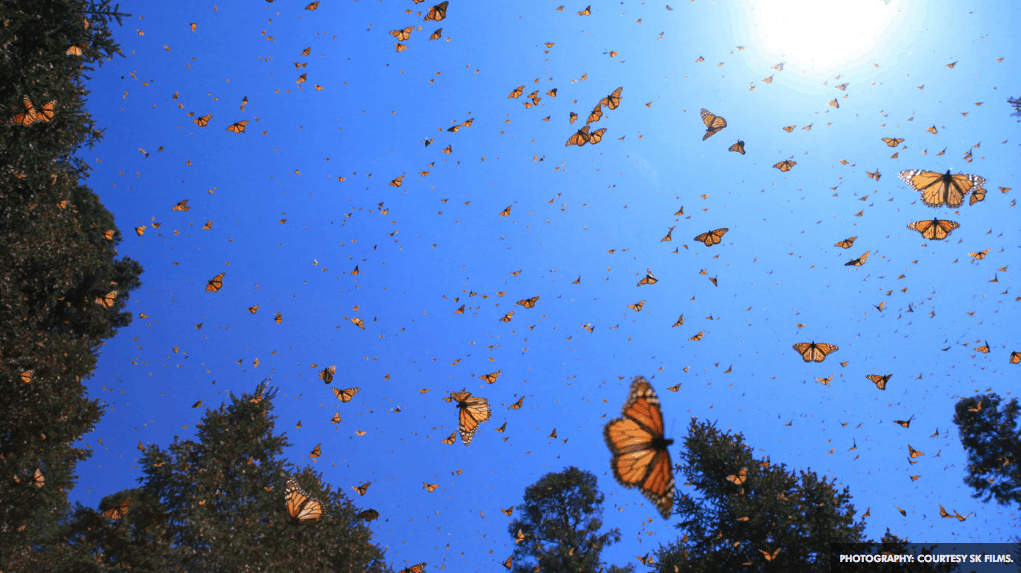 Sometime between mid- and late March each year, they’d magically appear in North Texas from Mexico, their dramatic bright orange wings thickly outlined in black. They’d stay for a few weeks, usually no more than four, before flying off to their summer homes as far north as Canada. Every spring it was like this, and again in the fall. Their annual comings and goings were something I looked forward to every year.

What an impression the monarch makes. Most people love them simply for their beauty. But they are also amazing in the annual feat they perform. With a wingspan of 4 inches, the monarch is an insect superhero, covering as much as 80 miles per day. Their highly evolved fall migration involves traveling thousands of miles from as far north as Canada to overwinter in Mexico. Monarchs west of the Rockies are a different population and migrate southwesterly to California to wait out the cold months in more than 200 coastal locations. East of the Rockies, the route spans 3,000 miles from Canada to central Mexico, via a large swath of the central part of the United States that cuts through Texas and Oklahoma. If you live along the flight path, you know the joy of seeing those orange and black wings delicately alighting or fluttering through as the butterflies head north in the spring and then south in the fall when their grandchildren head to Mexico — a place that they’ve never been but that they miraculously find, down to the same trees in the same forests where earlier generations have overwintered.

As iconic as monarch butterflies are, few of us noticed when they began disappearing in alarming numbers. Ten years ago, there were more than 1 billion monarchs in migration. By 2013, the population had dropped by 95 percent, to just 35 million. Today conservation groups across the country are scrambling to stop their decline and rebuild the monarch population before it’s too late.

“The U.S. Fish and Wildlife Service was petitioned to list the monarch as an endangered species. It seems almost unfathomable that the population has slipped that much,” says Carter Smith, executive director of theTexas Parks and Wildlife Department, one of dozens of organizations participating in the push to turn the monarch crisis around.

It’s such a big deal that it got the attention of the leaders of all the nations on the monarch’s migratory route. In February 2014, at the annual North American Leaders Summit held in Toluca, Mexico, Mexican president Felipe Calderón spoke to Canadian Prime Minister Stephen Harper and President Barack Obama about the monarch butterfly dilemma. He proposed a tri-national strategy to help repopulate the monarchs.

The U.S. Fish and Wildlife Service was alerted immediately via a phone call from Secretary of Interior Sally Jewell. “She called me up to her office and said, ‘Can you do something about this?’ ” says Fish and Wildlife director Dan Ashe. He already knew about the monarch problem, but now with multinational muscle behind it, he had hope that a solution might actually be possible. If he could get enough people on board, reestablishing habitat along the monarchs’ American flyway could help fix the problem.

Although extreme weather conditions — the abnormal recent patterns of drought and rainfall in the United States — have played a role, the major cause of death of America’s favorite butterfly is loss of habitat. Illegal logging in the Oyamel forests in Mexico has destroyed large areas of its winter home. And herbicides have mostly destroyed its supply of milkweed — which monarchs need to lay eggs and feed their caterpillars — and other nectar-producing plants in their breeding grounds in the United States and Canada. “Roundup and other herbicidal applications have been applied to corn and other crops on a large scale in the Midwest and have affected the supply of milkweed,” Smith says.

But the destruction of milkweed is only part of a complex conservation problem, says George Cates, chief seed wrangler and resident milkweed expert at Native American Seed Farm in Junction, Texas. “The conservation community, the professionals, have boiled the monarch issue down to ‘no milkweeds equals no butterflies.’ While true, this is just part of the story. It implies that if we just had more milkweed plants, everything would be OK. The loss of milkweed habitat, open and contiguous native grasslands in the U.S., is the much bigger story. It’s the same story for the horny toad or any number of other species: Human activities aggregated compound on each other and result in significant habitat loss for many species, plant and animal. The impacts are easily observed if you know what to look for. We are beyond the tipping point, and the monarchs are the canary in the coal mine. Monarch habitat has been decimated due to everything from poverty in Mexico [which gives rise to illegal logging in the monarch forests] to more interstate commerce [which means more and more] butterflies winding up on the grill guards of trucks to subsidizing corn for ethanol [which gives over marginal lands once covered with milkweed to GMO crops laced with herbicides], and plain ol’ urban sprawl [which turns pasture land into manicured lawns, pavement, and asphalt].

“The exceptional drought since 2007 and general climate change haven’t helped matters either — butterflies need moisture. While monarchs showed a little uptick in population this year because we got some rain, they’re basically starving,” Cates says. “Which is why when you do see the occasional orange-and-black marvel flitting through, chances are that it weighs about half as much as a healthy one would.”

Author Barbara Kingsolver was hot on the problem with her 2012 novel Flight Behavior. Reviewing the well-received book for The Washington Post, Ron Charles commented, “Kingsolver has written one of the more thoughtful novels about the scientific, financial and psychological intricacies of climate change. And her ability to put these silent, breathtakingly beautiful butterflies at the center of this calamitous and noisy debate is nothing short of brilliant.”

Dr. Lincoln Brower, who has long recognized the monarch’s decline as a disheartening piece of a bigger puzzle, has been on the case much longer. A research biologist, zoology professor, and self-described student and admirer of the monarch, he has studied the butterflies for five decades and been beating the drum on their behalf for years. Over the past four decades, he’s made more than 40 trips to Mexico to study the monarchs in their overwintering forests and has been at the forefront of efforts to halt illegal logging in the butterfly sanctuaries there. His was one of the high-profile names on the petition to list the monarch butterfly as “threatened” under the Endangered Species Act, raising awareness of the problem facing monarchs and other pollinators and underscoring the sense of urgency.

Unlike Brower, we can’t do the critical science in Mexico’s biosphere reserves, huddle with important policy makers in Washington, D.C., and head to the Texas Hill Country to monitor monarchs’ lipid levels as they feed off nectar-producing flowers to boost their fat reserves. Besides the old but effective let-your-congressmen-know-you-care, what can a monarch-loving individual do?

“You don’t need Yellowstone Park to make a difference,” Fish and Wildlife director Ashe says. “You can plant [nontropical] milkweed and nectar-producing plants in your backyard, and that scale matters — you will see butterflies. Every backyard, every schoolyard, city, or state park — if you plant, they’ll come.”

Fortunately, there’s some movement on the policy front. Dozens of federal agencies have jumped on board, including the U.S. Forest Service, the National Park Service, and the Bureau of Land Management among them, plus nongovernmental groups like the National Wildlife Federation and the World Wildlife Fund. State agencies have joined hands and formed their own planting initiatives. In Texas, a key landing point along the monarch’s route, U.S. Fish and Wildlife has partnered with Texas Parks and Wildlife and Texan by Nature, the conservation nonprofit founded by former first lady Laura Bush, who has become a spokesperson for the monarch program. Ashe has also reached out to state governments, transportation agencies, city governments, and schools. Even Monsanto, the maker of Roundup, has pledged millions to the cause; besides throwing much-needed money at the problem ($3.6 million, according to the National Wildlife Fund Foundation), the corporation is part of a newly formed coalition, convened by The Keystone Policy Center, that’s bringing together a diverse group of conservationists, farmers, scientists, and landscape professionals from across the country to find solutions.

Part of the reason for his optimism: the rallying of support to help the monarchs. Ashe says he’s never seen such an overwhelming response to any conservation campaign he’s been involved in. “People recognize [the monarch] and empathize with it. The migration is magical. The transformation is remarkable. There are lots of reasons people connect with it. The world’s a better place when we have beautiful things like the monarch butterfly.”

The images used for this web exclusive are used courtesy SK Films, which released the 3D IMAX documentaryFlight of the Butterflies. Read more about the film.