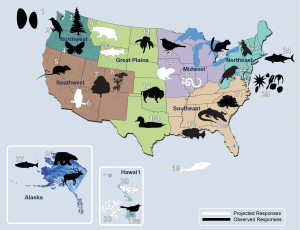 May 6, 2014 – The U.S. Global Change Research Program released its Third National Climate Assessment today that confirms that climate change is already affecting every region of the country. According to the report, landscapes and seascapes are changing rapidly, and many species may disappear from regions where they have been prevalent or become extinct, altering some regions so much that their mix of plant and animal life will become almost unrecognizable.

In a statement from the National Wildlife Federation, Patty Glick, senior global warming specialist who spent two years working on the report and was a co-author of the Pacific Northwest chapter said, “What strikes me most about this report is how many changes we’re already experiencing and how quickly they’ve occurred. The first National Climate Assessment back in 2000 was considered a look into the future, but just 14 years later, we’re no longer just talking about forecasts and models. Today we’re reporting on the changes we’re already seeing in our own backyards, and frankly I’m alarmed at the speed. Compared to previous projections, we’re seeing temperatures rising faster, oceans more quickly becoming acidic, fish and wildlife habitat shifting sooner than many species can adapt.

“That we’re seeing so many changes so rapidly is a call to act now to prevent these changes from overwhelming us in the future. We must confront the underlying cause of climate change by cutting carbon pollution, investing in clean energy and saying no to dirty energy. And we will also need to step-up efforts to prepare for and adapt to the impacts climate change already is having on our communities and wildlife by promoting climate-smart approaches to conservation.”

The Third National Climate Assessment was developed throughout four years by hundred’s of the Nation’s top climate scientists and technical experts, guided by a 60-member Federal Advisory Committee, and informed by extensive input from federal agencies, the public and outside organizations gathered through town hall meetings, public comment opportunities, and technical workshops across the country. For more information and to view the complete report visit nca2014.globalchange.gov.