Aug. 19, 2014 – Toxic algae outbreaks like the one that poisoned drinking water in Lake Erie are just one of many summer threats being worsened by manmade climate change, according to a new report from the National Wildlife Federation. Ticked Off: America’s Outdoor Experience and Climate Change explains how deer ticks, tiger mosquitoes and fire ants are getting a boost from warmer temperatures and milder winters – and in the case of poison ivy, from carbon pollution itself. 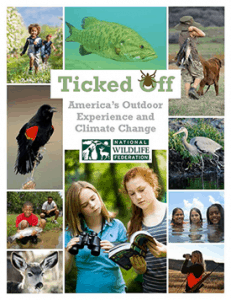 “At a time when disconnect from nature is already harming the health and well-being of America’s children, climate change is now adding a new obstacle for parents by giving a boost to annoying summer pests,” said Collin O’Mara, president and CEO of the National Wildlife Federation. “We need to act now to protect America’s outdoors by using climate-smart conservation strategies and by cutting climate-disrupting industrial carbon pollution, and the Environmental Protection Agency’s proposed limits are an important step in the right direction.”

The report examines climate change’s impacts on eight species, including:

“This summer, climate change is teaming up with pests to kick sand in our faces,” said Dr. Doug Inkley, senior scientist at the National Wildlife Federation. “Whether you’re a day hiker, a weekend sport fisherman, or a backyard gardener, you need to know that unless we act now to cut carbon pollution, climate change will continue to alter your favorite places and give a leg up to the pests that live there.”

More than 90 million Americans participate in wildlife-related recreation, spending nearly $145 billion each year, according to the 2011 U.S. Fish and Wildlife Service survey.

“We used to think of climate change as a distant, far-off issue. Now, we can see it happening in our own backyards,” said Katharine Hayhoe, director of the Climate Science Center at Texas Tech University. “By failing to cut our carbon emissions, we’re putting what we love about nature and the outdoors – and even more importantly, the health of our own kids – at risk.”

Passing along a strong connection to America’s outdoor heritage is a key concern of sportsmen. A 2012 sportsmen poll by the National Wildlife Federation showed 91 percent of hunters and anglers say children’s disconnection from nature and the outdoors threatens the future of wildlife conservation in America. The new report outlines the key steps needed to stem climate change and save the outdoor experience. Download the report here.

The National Wildlife Federation is America’s largest conservation organization. We work with more than 4 million members, partners and supporters in communities across the country to protect and restore wildlife habitat, confront global warming and connect with nature.