The population of grassland birds, like Oklahoma’s dickcissel, have had a decline of more than 90 percent in recent years. With the loss and changes of habitat, pesticides and other chemicals and other factors, birds that find their home in the grasslands are disappearing much more quickly than birds of other habitats. 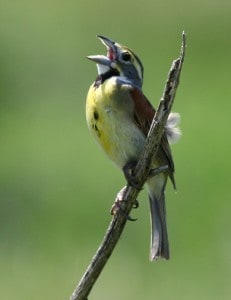 A new collaboration between conservation agencies, including the National Wildlife Federation, was formed in 2014 to create a bold approach to helping species that are on the decline:

Making the case for dedicated federal funding for wildlife is tough, especially in a challenged economy and a political climate charged by a presidential election. “Federal legislators resist ideas like creating a new tax on outdoor gear, such as tents and field guides,” says Edelson.

This March, [theBlue Ribbon Panel on Sustaining America’s Diverse Fish and Wildlife Resources] released its final recommendation, calling it a “21st century solution” to fund “proactive conservation” that would prevent species from declining to the point of being listed. And the plan would do this without creating new taxes or other charges to citizens or businesses.

The solution focuses on an existing federal tax paid by oil, mining and other extractive industries for the right to develop resources on federally administered public lands and waters. This tax amounts to more than $10 billion every year that the federal government channels into its general fund. The panel is asking Congress to dedicate up to $1.3 billion of this money annually into the existing and currently unfunded Wildlife Conservation and Restoration Program—a potential boon for wildlife management across the nation.

This proposed funding mechanism would allow the states to cover about 75 percent of the costs of implementing their mandated wildlife action plans. The funds would also be a permanent authorization, not subject to the annual federal budget process.

“The new income would be like a transfusion for anemic agency budgets,” says Edelson. In New Hampshire, for example, the entire nongame program squeaks by on about $1.4 million annually, an amount that would jump to $12 million under the panel’s plan. “With this funding,” Kanter says, “we could scale up protection to a level that meets the need rather than chasing after species that have already gone too far down.”

To learn more about this new initiative, check out the National Wildlife Federation.