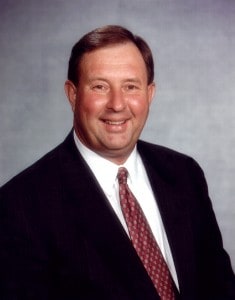 September 2, 2014 – On Sept. 1, Oklahoma Conservation Commission leader Mike Thralls officially retired after 20 years of service to Oklahoma—17 as executive director of the Oklahoma Conservation Commission. He leaves behind an agency positioned to meet the conservation challenges of tomorrow thanks to his leadership and emphasis on partnerships between local, state and national entities. Such partnerships helped the agency achieve goals with limited financial resources.

An embodiment of the locally-led, voluntary spirit of conservation in Oklahoma, Thralls uses the same practices encouraged by the Commission on his own farm and is an enthusiastic advocate of soil health. His vision led to the creation of the state’s first Conservation Cost-Share Program in 1998, which assists Oklahomans in installing conservation practices on their land to improve water quality and reduce soil erosion. In 2007, Thralls oversaw establishment of the Conservation Reserve Enhancement Program, which has improved or restored Oklahoma streams.

“Partnership is critical to accomplishing the great task of natural resource conservation,” said Kim Farber, Oklahoma Association of Conservation Districts President. “No one understands this better than Mike, and it’s why Oklahoma leads the nation in so many areas of conservation.”

Working closely with partners, Thralls has brought millions of federal dollars into the state to revive Oklahoma’s aging flood control dam system. In 2001 he received the National Watershed Coalition’s Meritorious Service Award, and this year was elected president of the National Association of State Conservation Agencies. He also received the President’s Award from Oklahoma Association of Conservation Districts in 2014. He is a 1988 Leadership Oklahoma graduate and proud graduate of OSU.