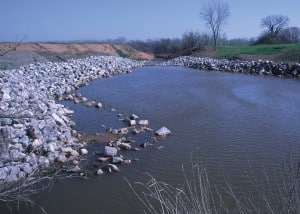 May 19, 2014 – Voluntary conservation practices place Oklahoma among the water quality elite for another year. Farmers, ranchers and other landowners have helped nine more streams to be removed from Oklahoma’s 303(d) list of impaired streams. These streams are candidates to join 37 other EPA-recognized water quality success stories, for which Oklahoma ranks second in the nation.

The nine streams located in Bryan, Choctaw, Coal, Garfield, Grant, Kay, Logan, McIntosh, Osage, and Pontotoc counties have been removed from the impaired streams list for marked reductions in turbidity, the amount of sediment suspended in water.

Because drought naturally reduces turbidity, these streams were unlisted using pre-drought data from 2004-2009. Data from subsequent years continues to support improvements as a result of conservation practices such as fencing-off stream banks from livestock and not tilling fields in order to reduce chemical and soil runoff into streams.

Maintaining these practices is particularly important in times of drought because less frequent rainfall can negatively impact water quality. Existing pollutants in the water become more concentrated as water levels decrease. This can harm organisms living in the water and require additional chemicals to treat drinking water. Along banks, dry, sparser vegetation filters water runoff less effectively, while less frequent rain leads to higher concentrations of pollutants such as motor oil and fertilizers to accumulate on the ground. When rain finally does wash pollutants into streams, the higher concentrations can overwhelm ecosystems.

“In much the same way voluntary conservation practices being used by farmers and ranchers have so far prevented Oklahoma from slipping back into another Dust Bowl during this drought, it’s our hope that these best management practices will prevent water quality problems when the rains finally come,” said Kim Farber, President of the Oklahoma Association of Conservation Districts.

OCC monitors approximately 450 streams statewide on a five year rotation. Monitoring data is used to determine water quality and identify how conservation practices are affecting streams, as well as how and where conservation efforts should be focused in the future.