The following is an article from the Muskogee Phoenix on June 7, 2016: 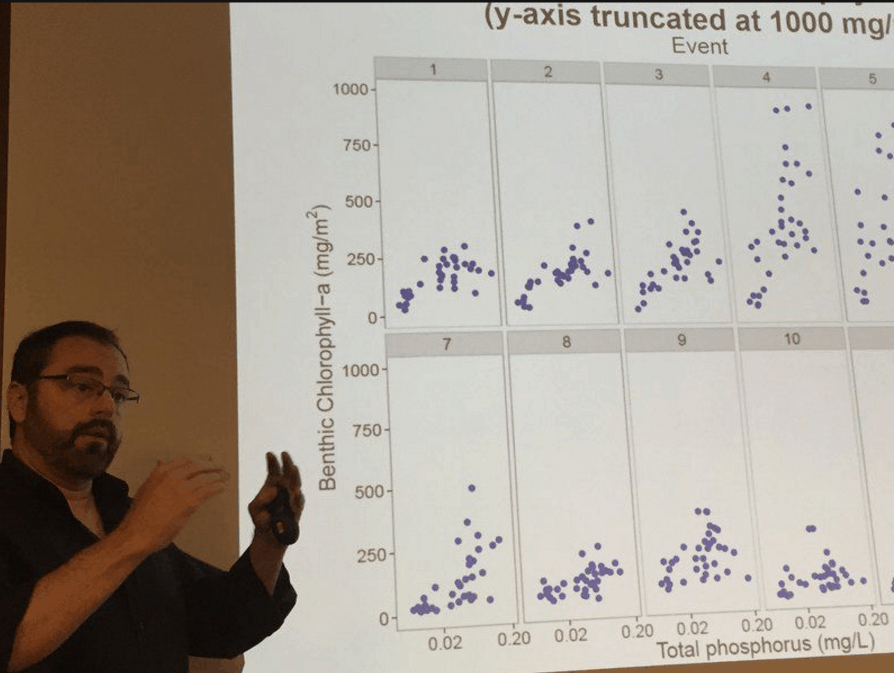 Photo by D.E. Smoot of the Muskogee Phoenix

JENKS — Members of a two-state panel began staking out positions about how to use water-quality data to identify threshold levels of phosphorus to prevent degradation of Oklahoma’s scenic streams and rivers.

Dr. Ryan S. King, the Baylor University professor who is leading a two-year stressor-response study of the Illinois River Basin, presented on Tuesday data that will be used to make that determination. Although all the data have been compiled, some testing has yet to be completed.

Members of the six-member panel — the governors of each state appointed three panelists — now must determine how all the information collected and compiled will be analyzed and presented. They are scheduled to report their findings, conclusions, and recommendations by December.

The issue that surfaced Tuesday during the panel’s meeting involved the determination of a time frame during which phosphorus concentration of a certain amount results in the growth of nuisance algae. The present standard contemplates a 30-day mean, but some panelists suggested that should be changed to a six- or 12-month average.

“To me our charge is pretty narrow: Over what time period do you have to have … (a) concentration to get nuisance algae to grow,” said Derek Smithee, the head of the Oklahoma Water Resources Board’s water quality division and a committee co-chairman. “I can’t believe it takes six months to do that, because we have data that show it happens in a month.”

Another co-chairman, Brian Haggard, a University of Arkansas professor, said a six-month average is more suitable because it is easier to spot statistically significant increases in algal growth. He pointed to the fact there were some months during the data-collection stage of the study when it seemed there were no observable responses of algal growth to water chemistry.

“There were months where we can’t see a threshold response, but we did see a threshold response when we averaged over the six- or 12-month period,” Haggard said. “That is where the averaging over a time period balances those times when you see strong responses and those times when you don’t see a response because you might have sampled immediately after a scouring event.”

The data collected during the past two years by King’s research team was part of a three-year study authorized by a February 2013 agreement hammered out by the attorneys general of Oklahoma and Arkansas. The second joint statement of principles was inked in an effort to avoid protracted litigation regarding the validity of Oklahoma’s numeric phosphorus standard for its scenic rivers.

Litigation became a threat after technical advisory group determined the 0.037 mg/L standard adopted in 2003 to be valid after panelists spent a year reviewing new scientific and technical evidence that supported its legitimacy. A minority report backed by two Arkansas agencies disputed that finding, setting the stage for a lawsuit that was avoided by the agreement executed Feb. 20.

The standard was set in an effort to address degradation of water quality within the Illinois River watershed. Stream overloading of nutrients such as phosphorus and nitrogen promote vegetative growth, which depletes dissolved oxygen levels and reduces water quality and threatens aquatic life.

Marty Matlock, another professor appointed to the panel as an Arkansas representative, also argued for a longer duration. He based his argument on what he described as a pragmatic level of enforcing phosphorus standards.

“We don’t want to chase ghosts — compliance ghosts,” Matlock said. “To avoid chasing ghosts and to get to the meat of it, we are trying to drive the system to the level of algal production that is acceptable to our communities.”

Smithee countered, saying Oklahoma’s phosphorus standard is intended “to avoid having a nuisance condition.” The goal, he said, is prevention, to find a threshold level for phosphorus that stops algal growth from happening.

Pat Daly, a representative of Trout Unlimited, said his hope is that any final recommendation the two-state panel makes to the governors of their respective states will have no negative impact on the state’s scenic rivers system. Daly cited economic reasons for his position.

“From our group’s perspective … it is critical that we maintain, retain, and keep those waters as clean as possible,” Daly said. “While this is scientific, there is also a huge economic impact — either positively or negatively — based upon the recommendations.”

Panel members plan to meet again Aug. 10. The meeting location has yet to be determined.