Populations of northern bobwhites and scaled quail appear to be making great strides this year in recovering after severe drought parched the state from 2010-13, according to findings from the annual roadside quail surveys conducted by the Oklahoma Department of Wildlife Conservation. 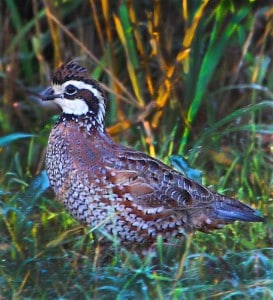 Northern bobwhite populations are rebounding in most areas of Oklahoma according to roadside surveys conducted by the Wildlife Department. (Jeff Neal / ODWC)

“It would really surprise me if we don’t have one of the best quail seasons that we’ve had in a long time,” said Alan Peoples, chief of wildlife for the Oklahoma Department of Wildlife Conservation.

He anticipates this year’s quail hunting season will be the best the state has seen in 10 years, even though he’s talked to many landowners in western Oklahoma who predict this season will the best in 20 years.

Scott Cox, upland game biologist with the Wildlife Department, says the recovery in quail numbers this year continues a trend that began in the summer of 2013.

“This year marks the second year in a row for ideal rainfall and cooler weather during the spring and summer months,” Cox said.

“These regions endured severe flooding events during May, followed by dry and hot conditions over the next three months … the most important for reproduction and chick development,” Cox said.

The Wildlife Department has conducted annual roadside surveys since 1990 to index the quail population across Oklahoma. A total of 84 survey routes, each 20 miles long, are driven in every county except Oklahoma and Tulsa. Observers record the number of quail seen along the route to provide an index of quail abundance.

“There are quail to be had. This year, if hunters don’t find success, they just need to find another spot to try,” Peoples said.

Quail season will open Nov. 14 statewide, and bird hunters are invited to share their field reports and photos on the Wildlife Department’s Facebook page at facebook.com/wildlifedepartment. Read the full 2015 Quail Season Outlook online at wildlifedepartment.com.