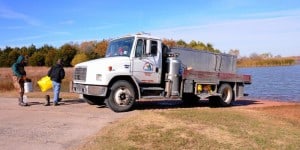 A delivery truck carrying trout from Cedar Springs Fish Farm in Nebraska arrives earlier this season for stocking in one of the ODWC designated trout-fishing areas. Photo: ODWC

Fewer trout than usual have been stocked at Oklahoma’s designated trout fishing areas because of production problems experienced by the state’s contracted supplier, says the Oklahoma Department of Wildlife Conservation (ODWC).

Twice in December, Cedar Springs Trout Farm of Broadwater, Neb., reported that it suffered power supply interruptions that curtailed the supplier’s ability to deliver the number of fish needed to continue normal stockings on schedule.

To effectively manage the situation, the ODWC has tried to maintain the same frequency of stockings at the various trout fishing areas, but with a reduced number of trout being stocked each time.

“We don’t want Oklahoma’s trout anglers to think that there’s no point in going fishing,” said Ken Cunningham, ODWC fisheries division assistant chief. “We are still stocking trout, and there are still trout out there for catching. It’s only that there are going to be a few less trout in the water than  anglers might normally be used to.”

Cunningham said crews have been able to keep on schedule with stockings in most designated trout-fishing areas by using fewer fish and by procuring a small number of additional trout from other suppliers.

“Anglers go trout fishing for many reasons, like the experience of being outdoors, the recreational benefits and the relaxation that can be found amid nature’s beauty,” Cunningham said. “If you are considering a trout-fishing trip, it’s still well worth going, and you can still catch some trout for the table.”

Trout, both rainbows and browns, are introduced species to Oklahoma. They thrive in colder waters and make excellent table fare. Trout are not produced at any of ODWC’s fish hatcheries, so trout suppliers are contracted to supply fish for the state’s annual trout-stocking program.

ODWC operates two year-round trout fisheries in the Lower Mountain Fork River below Broken Bow dam and in the Lower Illinois River below Tenkiller Ferry Dam. Trout are normally stocked in those areas every week or two, but actual stocking days vary based on trout delivery schedules.

Trout anglers must carry a resident or nonresident fishing license while fishing. In addition, trout anglers at Dolese Youth Park Pond must have an Oklahoma City fishing permit.

Trout fishing regulations, including daily and size limits, restricted areas and maps, can be found in the 2014 “Oklahoma Fishing” regulations guide online or in print where fishing and hunting licenses are sold.