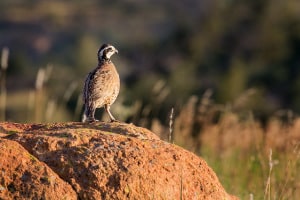 Northern bobwhite populations have improved significantly in most areas of Oklahoma this year, according to annual roadside surveys conducted by the Oklahoma Department of Wildlife Conservation. (Photo by Larry Smith/Flickr CC BY)

October 30, 2014 – Annual roadside quail surveys have been completed for 2014 and the results are good news for quail hunters in Oklahoma, says the Oklahoma Department of Wildlife Conservation (ODWC). The statewide quail population index increased 66 percent from the previous year. Quail counts conducted in August and October showed higher numbers of birds in all of Oklahoma except the south-central region.

“We documented outstanding reproduction, and it looks like it will be one of the best seasons in a decade,” said Richard Hatcher, director of the ODWC.

Scott Cox, upland game biologist with the ODWC, said the weather plays an important role in quail production. The past two years, Oklahoma has seen model years for rainfall and cooler temperatures during the spring and summer months, after previous years of hot and dry conditions.

The recent favorable weather conditions helped more birds carry over into the nesting season and allowed those birds to have a chance for multiple nesting attempts and some late-season hatches, Cox said.

Quail season will open Nov. 8 statewide and bird hunters are invited to share their field reports and photos on the Wildlife Department’s Facebook page at facebook.com/wildlifedepartment. To read the full 2014 Quail Season Outlook, click here.