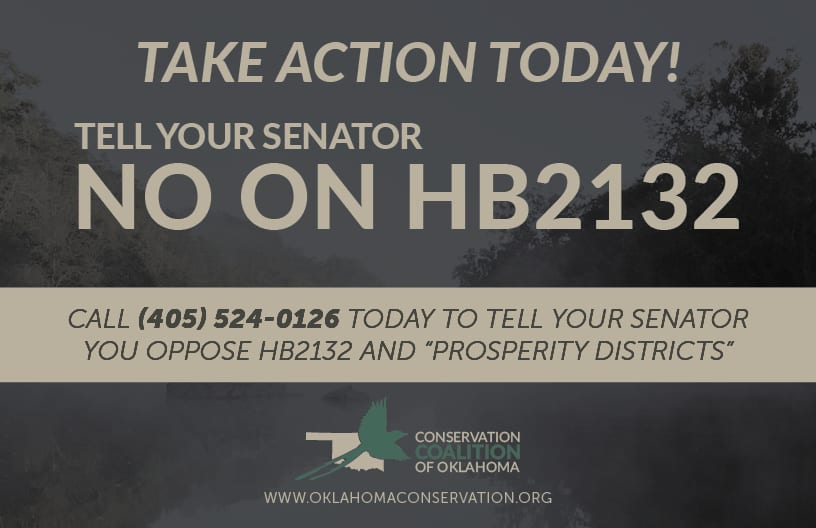 The Oklahoma legislature is considering a bill that reflects the poor values of State Question 777, favoring large corporations over individual citizens, landowners and wildlife.

HB2132 would create “prosperity districts” in which landowners could file a petition to create a district on their own land and in turn, create most of the rules of that so-called district.

According to the Oklahoma Policy Institute, once a district has been filed, landowners would “negotiate a revenue covenant with the state instead of paying state and local taxes, and the district would be governed by a governing board.”

If county officials do not act to deny a petition to create or expand a “Prosperity District,” citing specific deficiencies within 20 days, it will automatically go into effect. That creates a lot of potential for powerful special interests to force through these Districts by overwhelming county officials with applications. Basically, this bill could allow corporations and other special interests to create their own governments – all they need is a bit of land.

Once created, a Prosperity District could be used to get around the wishes of local government and voters. For example, a factory farm could create a Prosperity District that allows them to ignore state and local rules about waste disposal and food safety. The idea that Oklahoma should shackle its ability to regulate industrial agriculture was clearly rejected by voters last fall, when SQ 777, the so called “Right to Farm” State Question, was defeated at the polls.

With Prosperity Districts, landowners could exempt themselves from the rules that apply to the rest of us. Besides the threat to neighbors of the district, Prosperity Districts could create even more complications for Oklahoma businesses.  Businesses inside the district could be given a big competitive advantage from being exempt from many state and local regulations, while other businesses would still be subject to all these rules.

Less than six months ago, the citizens of Oklahoma struck down a bill that would have allowed corporate agriculture and companies to function with few regulations, State Question 777. As citizens and advocates for our individual rights, we will not stand for similar legislation to move forward.

The board and members of the Conservation Coalition of Oklahoma strongly oppose HB2132 and encourage our supporters to spread the word against this legislation.

Call, fax and email your senator and tell them we will stand up for the rights of our land, our water, our citizens and our wildlife.

How to spread the word

Use the email or fax template below

Highlight the text, right click, copy. Paste the text after visiting the link to fax or email your senator. Fill in text in brackets below as appropriate before sending.

The legislation I am addressing is HB2132, which would allow the creation of “prosperity districts” for landowners in Oklahoma. This issue directly impacts Oklahoman’s right to clean and safe land and water, the conservation of wildlife and their habitats and creating a fair playing field for businesses of all sizes.

I am primarily concerned about the development of prosperity districts because HB2132 would allow large corporations to ignore state and local rules about waste disposal and food safety.

Another aspect of this same issue that could affect Oklahoma’s individual citizens and small businesses is the fact that large businesses inside so-called prosperity districts could be given an advantage from being exempt from many state and local regulations, while other businesses would still be subject to existing rules.

I will look forward to your reply expressing your opinions, and your current stance on the issue.

Thank you for your consideration of my viewpoint on this matter. I believe it is an important issue, and would like to see the legislation fail to ensure the rights of our citizens and the safety and conservation of our land, water and wildlife.