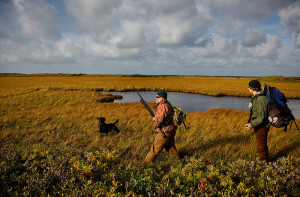 The Oklahoma Department of Wildlife Conservation is working on a plan to lease property from interested landowners to provide increased walk-in hunting and fishing access to sportsmen.
At its September meeting, the Oklahoma Wildlife Conservation Commission heard a presentation on the plan, made possible by a Farm Bill program grant of more than $2.2 million awarded to the Department last month. With more than 95 percent of the land base in Oklahoma under private ownership, the program will open more access to sportsmen looking for places to hunt and fish.

Officials with the Department say the details of lease agreements and plans for the program are in the early stages of development, but special emphasis may be placed on lands in close proximity to populated metro areas as well as on species for which there are few existing public opportunities.

According to Russ Horton, wildlife research supervisor for the Wildlife Department, the agency anticipates making access to new properties available to sportsmen by as early as fall 2016.

“Additional details on this program will be forthcoming as we move through the planning stages,” Horton said.